Those for whom prayers are requested:

Those for whom prayers are requested:

4.  Pledge of Allegiance to the Flag

8.  Opening Ode:  The Council elected to dispense with the opening ode.

10.  Reading of Minutes of Previous Meeting:  The Council approved the record of the Council finances and actions of the November 13, 2018 General Membership meeting.

11.  Report of Admission Committee and Reading of Applications:  No report

18.  Report of Auditors and Trustees – No report

19.  Chancellor’s Report on Vocations – No report

21.  Report of the Round Table Chairman – Not applicable

22.  Report of Standing Committees – No report

3.  District 53 meeting – District Deputy Swing advised the Council that the criteria for the issuance of state awards have been made more restrictive, thus state awards will be harder to receive in the future.

District Deputy Swing mentioned the four pillars of the Faith in Action model:  faith, family, community and life.  Please refer to his report under #27.

4.  Christmas Eve parking – Eugene Dust reported Jim Grube coordinated the parking activities in his absence on December 24, 2018.  Jim reported that a number of members, together with family members and parishioners made the work a success.  Jim and Tom Silver noted that the act of wishing families a Merry Christmas as they left their vehicles helped the parishioners “get into the spirit” as they walked into Church.

5.  Free throw competition – Grand Knight Rode reported Bill Swing, Joe Badalucco and he met to discuss the competition and decided to forego the 2019 cycle in favor of preparation for the 2020 cycle.  Further information is contained in the District Deputy’s report – #27.

1.  Cinnamon roll weekend – Tom Silver reported the weekend will be January 25-27.  Bill Swing volunteered to send a flyer to the membership soliciting help.  Tom indicated the greatest need is Friday evening cleanup and Sunday morning sales.  Tom reported that Josh Phinney, a manager at Hy-Vee grocery store, has offered to provide a price break for the rolls and frosting.

4.  Knights of Columbus survey – Grand Knight Rode advised the members that the survey is due January 31, 2019, and asked that the members fill out and return their surveys as soon as possible so the roll-up and submittal can occur by the 31st.

5.  Requests for donations – Grand Knight Rode reported that he has received requests for financial assistance from St. Stephen’s, Missions, Inc. and others organizations.  After limited discussion, no further action was taken.

6.  Purchase of rosaries – Earl Forrence had advised the officers via email that the Council needs 15 each of the black and the white Knights of Columbus rosaries for the Adoration Chapel, members brought into the Council, and the RCIA candidates.  In addition, 156 each of the blue and clear crystal rosaries are needed for Confirmation candidates and the NPH orphanage.  Tom Silver volunteered to purchase the rosaries, with reimbursement to be provided.  Motion to make up to $500 available for the purchase of the rosaries was approved.  Note:  Tom subsequently purchase the crystal rosaries at a cost of approximately $300.00, including shipping cost.

7.  Council website – Bill Swing volunteered to serve as the Council’s webmaster.  The condition of the website was the subject of discussion, and Bill indicated he would work to make the website more user friendly.  Bill also asked officers to develop their postings in a Word document and submit them to him for posting on the website and email distribution to the Council.

8.  Council credit card – Treasurer Mertens reported that Wells Fargo has issued a credit card to the Council for its use.  Motion to use the credit card for business to business transactions was approved.

9.  Holy Name of Jesus school fundraiser – Grand Knight Rode reported that a representative of the school has solicited the Council for assistance in the raising of funds for the school.  Motion to give $100.00 to the school for its use in its fundraising effort was approved.

25.  Report of the Fourth Degree – Dan Cincoski reported that the Fourth Degree Knights renewed their 1st through 4th degree obligations on January 7, 2019 at St. Peter and Paul Parish in Loretto.  Those who brought swords to the event had their swords blessed.  Dan also reported the spring exemplification will occur in Bloomington, May 14/15.

1.  New Year message – All Council members were encouraged to embrace the four new pillars of the Faith in Action model:  faith, family, community and life, and think about how our Council may best respond.  District Deputy Swing offered what the Council should engage in each of the four categories in order to comply with the minimums of the Knights of Columbus to achieve the Columbian award.  He recommended the members refer to the website at:  KofC.org/faithinaction for more background and information.

5.  Major Degree Exemplification schedule – The schedule is as follows:

6.  Supreme Convention – A website link will soon be available for Knights to select volunteer opportunities.

7.  Seminarians join free – This is a new membership offer where seminarians may join the Knights of Columbus and enjoy free membership as long as they remain in the seminary, or are ordained to the priesthood.

30.  Closing Ode:  The Council dispensed with the closing ode.

Let’s get Father Steve to this Priest’s Retreat this summer!   See retreat details at :  https://stpaulcenter.com/events/priests

Jon Hickman has been coordinating this effort.  (Thanks Jon!)  Jon presented to the Council on April 11th and followed up with this email:

As I mentioned, I think it is important that we remind men that this should be a gift in addition to their normal support of Holy Name of Jesus rather than replacing a normal contribution. This is one of the reasons I would rather see many small donations than a few larger ones. Also, many smaller donations will allow more of the men of the parish to participate in sending Fr. Steve to this retreat.

Fr. Steve is truly excited about being able to attend this retreat. While I know we have all seen him excited about events here at Holy Name of Jesus, but to see him excited about something for himself is a real treat – and well timed I believe in light of the recent loss of his sister.

As mentioned, I will prepare some envelopes to leave at the front desk for anyone interested to use in dropping of a donation. Checks if written may be made out to me. As mentioned, if we raise monies beyond the event costs and “traveling money” for Fr. Steve, we will ask him to designate where at Holy Name of Jesus the excess funds should be used.

Thank you all again for the opportunity to address the Knights as well as for your prayers for the success of our “Get Fr. Steve to the Priest’s Retreat” efforts. 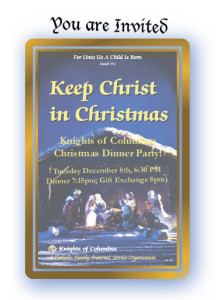 All Brother Knights and their significant others are invited to join us for the annual council Christmas Party. Over the next few days you should be receiving a postcard in the mail from us here at the council (Looks similar to the one pictured to the left) that will also lead you to this page. We plan to update this page with any last minute event information updates etc. However, we would like to ask that you please RSVP using the below link and specify your attendance and participation if you wish to in the Christmas Gift Exchange.

Should for some reason the $20 charge be a burden on you and thus hinder your attendance to the party we encourage you to ask that the cost be waived.

For more information on this event please contact Bill Swing or Dave Stumpf.

The event schedule is planned as follows:

die Gloe, Director of the Minnetonka Life Care Center, is asking for our help with the expansion of the Center. New space previously occupied by an adjacent salon will be added. Work will involve tear down of walls, cabinets, ceiling, flooring, sheet rocking, etc. The goal is to have this project completed by mid January.

Brother Greg Wacek and his partner Dave Peterson will be providing us with the details, i.e. timing, number of volunteers, specific tasks, etc.  (You may recall that Greg completed the construction of a new room in the Center back in 2012.) Watch for these details in an upcoming announcement.

At this time, we are looking for a Knight to serve as the “Council Project Liaison”. This person would be responsible for communicating with Greg and/or Dave and coordinating KC Council volunteers. If interested, please contact Bill Swing.

A great opportunity to promote life!

If you have any questions about our Council and would like to talk to someone, email us at [email protected] and we’ll get back with you.